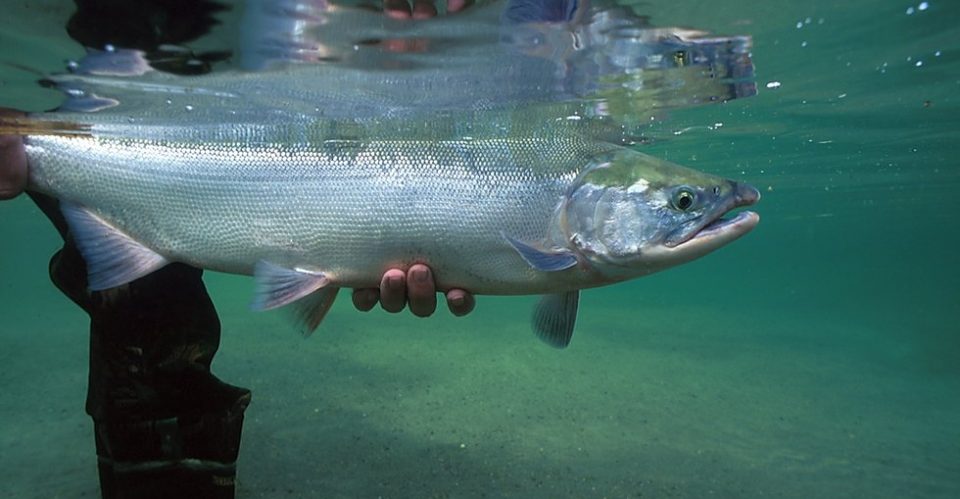 COPPER RIVER REDS, THE MOST PRIZED STOCK OF ALASKAN SALMON

Red salmon (Oncorhynchus nerka), also known as Sockeye, are hands down the best tasting of the Pacific salmon.  Fishing for red salmon requires attention to detail and a very specific technique. Below is some information to help you catch more fish on your fishing trip. Read it over because the red (sockeye) salmon are also known to be the hardest salmon to catch.

The red salmon spend most of their life migrating offshore in the saltwater and return to their home rivers to spawn upon reaching maturity. Red salmon feed on really small stuff like plankton, krill and tiny shrimp. The feeding habits of red salmon make them the least aggressive of the salmon, maybe because of their inherent position in the food chain. In fact, red salmon do not usually “bite” at all.  About 75% of the time they are not biting when you hook them. In most cases, we catch red salmon using a technique called flossing: the fishing line drifts into the fish’s mouth and gets pulled tight, incidentally setting the hook

The most common technique we use to catch red salmon in fast moving rivers is called flossing. The technique is executed when the angler pulls out line and casts slightly upstream, allowing it to sink, and drift down river with the current. The idea is that when the red salmon are swimming upstream you will place the line in the fish’s mouth and pull it tight, setting the hook into the jaw, allowing you to hook a fish that was never going to “bite”. Even though the technique may sound tricky it can be mastered. Using yarn can increase hook ups as the red salmon teeth get stuck in the fibers. When choosing a fly, yarn or lure to floss for red salmon, always choose a sparse pattern with the color red. Flossing is usually done very close to the shore along gravel bars and above/below choke points

Jigging is a common fishing technique that is executed when the angler ties a weighted lure to the end of the fishing line and lowers it to the bottom, lifts the weight up off the bottom and lowers the tip of the rod back down until the weight touches bottom, over and over again, until a fish strikes. A variation of the jigging technique can be used to catch red salmon in calm waters such as deep pools and slow-moving eddies where it is not possible to effectively floss. The key to jigging for red salmon is tackle and rod selection. Always choose tackle that is small with hooks never larger than 1/0 and a rod that has good sensitivity. Jigging for red salmon can be done with any type of rod and the reel doesn’t come into play until you have a fish on!

Alaska residents may participate in the dip net fishery on the Upper Copper River. Dip-netting is one of the oldest styles of catching red salmon. Native Americans who inhabited the region for thousands of years used nets even before fish wheels to catch salmon. Dip-netting can be a very exciting experience. Contact us for a non-motorized Upper-Copper River subsistence dip-netting transport trip from Copper Center to Chitna, Alaska.

When the river you are fishing has good enough visibility to see the fish and you know the correct place to stand, catching becomes a matter of eye and hand coordination. There are some places on the upper Klutina River and Gulkana River where it is possible to sight fish for red salmon. The Gulkana River can offer great sight fishing in August and September.

Gravel bars can be a good place to fish for red salmon. Choose a gravel bar that has fast water or holding water below. Fishing a gravel bar with big slack water or eddy right downstream is a good idea because the reds will concentrate in the holding water and steadily run the edge of the gravel bar above it as they swim upstream. Fishing a gravel bar with a whitewater rapid or very fast current just below is a good bet because the fish are likely to be exhausted from the run. They will swim straight to the closest bank and hug the shore for a rest. Your time is best spent fishing a gravel bar that will have a steady run of fish passing by in groups rather than a gravel bar that may have a single fish passing occasionally. Pay attention to the exact spot that you hook up because the red salmon will run the same path. Even if you can’t see them you can find the exact spot where they will be, allowing you to target red salmon that are not biting, and be very successful at catching them!

Red salmon have a strong lake instinct and will stop to school up and hold in deep calm water while making their way up the river. Look for large eddies, pools, back channels and slack water for schooling fish. If you see a school, be careful how you approach the fish, as reds can be very skittish. The best way to get into position to fish a calm pool for reds is to approach the water from the downstream side or from the below where the school of red salmon are holding. When you hook a red in a school of fish that is in calm water it is important to quickly walk the fish below the school so you have a better chance of not scaring the fish out of the area. Red Salmon will start migrating out of calm holding holes when the water temperature rises. When fishing for red salmon in slack water the flossing technique will result in foul hookups so your best bet is jigging with a small hook no larger than size 6.